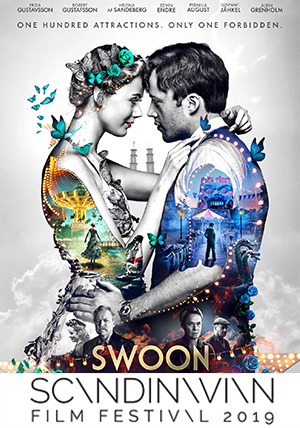 Swoon tells of two rival amusement parks in a raging feud. Gröna Lund offers respected and bourgeois entertainment while Nöjesfältet across the alley offers cheap beer, strippers and run-down attractions. The two families, ruling their miniature nations of rides, fortune wheels and fairy floss are determined to destroy one another when their young heirs Ninni (Gustavsson) and John (Grenholm) unexpectedly fall in love.

In the shadow of World War II the conflict escalates between the families in a swirling tale of war, treachery and forbidden love. This closing night selection of the 2018 Göteborg Film Festival is a visual feast in the realm of Baz Luhrmann. It provides a sumptuous escape into the legend of these parks and the Romeo and Juliet-esque war that raged between them.