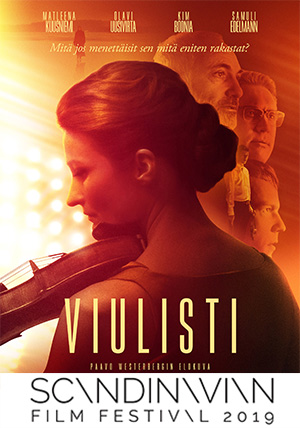 Award-winning Finnish playwright Paavo Westerberg made his directorial debut in the Nordic Competition at the Gothenburg Film Festival with this glossy character study of a famous violinist and her young student.
Matleena Kuusniemi makes a stunning transition from television to the big screen in the role of Karin, an internationally acclaimed concert violinist whose life is entirely consumed by her passion. When an accident renders her unable to play, she is flung into a crisis that neither her husband nor son can remedy. Left with no other option, she reluctantly takes a job teaching violin at a top Finnish music academy where she quickly falls for her gifted student Antti (Olavi Uusivirta). The more she is consumed by the relationship, the greater the risks she takes to spend time with Antti, as she pushes her family further away.
Kuusniemi is exceptional as a woman driven by desperation, relegated to the role of a housewife she has no intention of being. The familiar and appealing musical score throughout wonderfully compliment this intriguing romantic drama about dreams and letting your ambitions lead you.