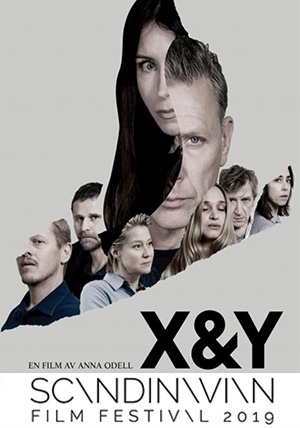 Venice Film Festival award-winning artist and filmmaker Anna Odell’s second feature premiered as the opening film of the 2019 Stockholm Film Festival. The stimulating exploration of hidden female/male identities features a stellar cast hailing from Sweden and Denmark.
Odell plays a version of herself as a female director infatuated with the macho film star Mikhael Persbrandt (In A Better World, 2010). The director and Persbrandt play different versions of themselves as a lead couple, while Odell has then chosen three actors to perform their alter egos. Relationship conflicts abound in this test environment, giving rise to jealousy, dominance and sexual obsession and putting into question how these traits relate to gender. As the cast become increasingly infuriated by Odell’s cryptic and basic script, two psychologists struggle to maintain order.
X&Y is a provocative piece of contemporary filmmaking which plays in the space between the sublime and the ridiculous. Meanwhile, its overarching concept is based in an identifiable logic: that every person has three identities - the self, the one we would like to be, and the way we are seen.