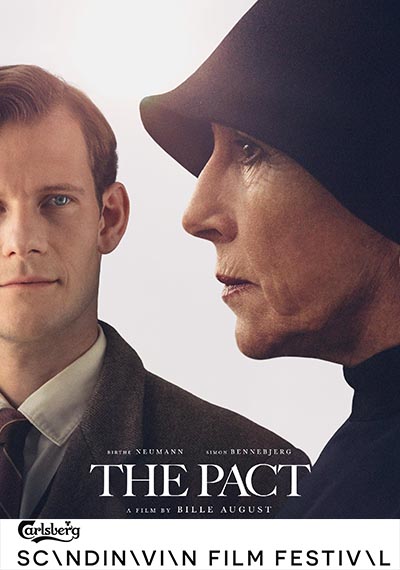 It is 1948 and 63-year-old Danish author Karen Blixen (Birthe Neumann, Happy Ending ScandiFF2019) is at the pinnacle of her fame and next in line to win the Nobel Prize for literature. It has been 17 years since she gave up her famous farm in Africa only to return to Denmark with her life in ruins. Devastated by syphilis and having lost the love of her life she has reinvented herself as a literary sensation.

Karen is an isolated genius, until the day she meets the talented 30-year-old poet Thorkild Bjørnvig (Simon Bennebjerg), promising him literary stardom if he will obey her unconditionally in return, even at the cost of him losing everything else in his life.

Based on the true story of Out of Africa author Karen Blixen, compelling slow burn drama The Pact recounts Blixen’s later life and explores the literary titan's toxic mentorship of young poet Bjørnvig.

Directed by the award-winning Bille August (Pelle the Conqueror, House of Spirits), this sterling adaptation of Bjørnvig's bestselling memoir delivers a well-crafted character study of an icon and her influence.

"Deftly mounted, shot and scored, The Pact is a master class in ensemble acting, led by Neumann in a visceral, deeply layered and knife‘s-edge turn."