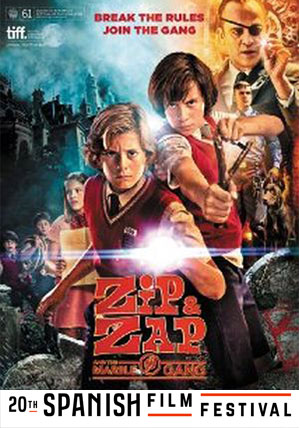 Zip and Zap are back! The latest instalment of the family adventure series is set at Christmas time, where we find the naughty twins up to their old tricks again, but this time one of their pranks has gone too far and their Christmas holiday has been cancelled! Instead, the boys are forced to go on a boring boat trip with their parents. To their enormous surprise, the destination is a spectacular remote island and when a terrifying storm rolls in they seek shelter at a mansion belonging to the
eccentric Miss Pam (Elena Anaya, The Skin I Live In SFF15). The next morning the boys’ parents have disappeared and they discover this is where children without families enjoy a paradise with no rules, but all isn’t what it seems. Helped by their new friends, Flecky, Macky and Pippi, the brothers try to uncover the mysterious secret behind the island and its strange inhabitants…The sequel to Zip and Zap and the Marble Gang (both based on the 1950s Spanish comic series) is a visually impressive feat with plenty of adventure
and excitement.