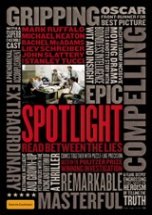 Starring Mark Ruffalo, Michael Keaton and Rachel McAdams, Spotlight tells the riveting true story of a team of Boston Globe journalists who exposed one of the biggest cover-ups in modern times. When the newspaper’s tenacious Spotlight team delves into abuse allegations against the Catholic Church, they uncover a shocking scandal involving the highest levels of Boston's religious, legal, and government establishment. Breaking the story in 2002, Spotlight’s efforts would earn them the Pulitzer Prize in 2003, set off a wave of revelations globally and cause a crisis in one the world’s most powerful institutions. Critically acclaimed and tipped as a favourite in this year’s Oscar race, Spotlight is a masterful film – thrilling, intelligent, deeply moving and wholly captivating from start to finish.