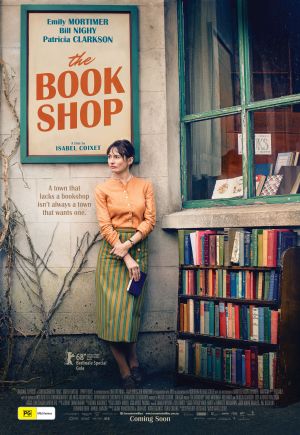 Patricia Clarkson, Emily Mortimer and Bill Nighy star in this lively period drama, based on Penelope Fitzgerald’s Booker Prize shortlisted novel. Set in a small town in 1959 England, it is the story of a woman who decides, against polite but ruthless local opposition, to open a bookshop, a decision which becomes a political minefield.

Mortimer (The Sense of an Ending) portrays the free-spirited Florence Green, a widow who sets her grief aside to open the first bookshop in the seaside town of Hardborough. She struggles to establish herself but by exposing the sheltered local townsfolk to the best literature of the day, including Nabokov’s scandalizing Lolita, Florence opens their eyes and brings about a cultural awakening to a town that has not changed for centuries.

She finds an unlikely kindred spirit and ally in Mr Brundish (Nighy, Their Finest BFF16). But this mini revolution also brings her fierce enemies, including Mrs Gamart (Clarkson, Easy A), a self-interested civic leader. When Florence refuses to bend to Gamart’s will, they begin a struggle not just for the bookshop, but for the heart and soul of the town.