The Doors: Break On Thru 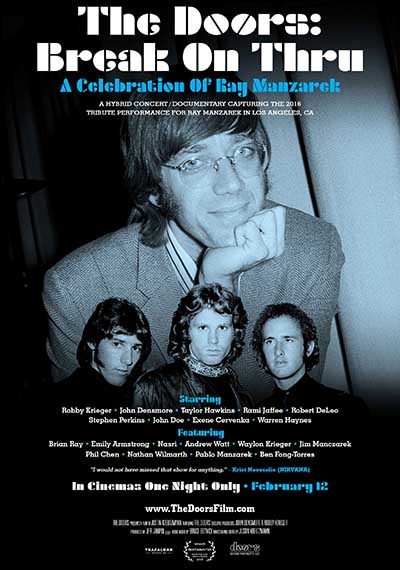 THE DOORS: BREAK ON THRU – A CELEBRATION OF RAY MANZAREK is a hybrid concert and documentary capturing a 2016 performance in Los Angeles, CA by surviving Doors members John Densmore and Robby Krieger to honor fellow Doors member Ray Manzarek on what would have been his birthday on February 12th.

The Doors were born when Ray Manzarek met Jim Morrison on Venice Beach in 1965. Ray became the beating heart of The Doors and the architect of their intoxicating keyboard sound. Manzarek’s evocative playing fused rock, jazz, blues, bossa nova and an array of other styles into something utterly, dazzlingly new.

The film also includes rare archival footage of the band, conversations with Jim Morrison and Ray Manzarek, and esteemed music journalist Ben Fong-Torres, as well as new interviews with John and Robby.