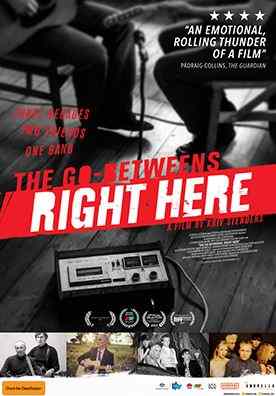 On May 6th 2006, on a Saturday afternoon while preparing a housewarming party,singer/songwriter Grant McLennan died of a
heart attack. His tragic death brought an end to one of Australia’s greatest musical partnerships. McLennan and Robert Forster,
the founding members of seminal Brisbane band The Go-Betweens, had been close friends and collaborators for 30 years. Their
body of work across countless group and solo albums is now recognised around the world as some of the greatest ever created in
this country. They are Australia’s own “Lennon and McCartney” and the legacy they and their fellow band members forged through
the late 70s, 80s and into the 2000s has now become the stuff of rock music legend.
Unflinching, insightful and at times painfully honest, The Go-Betweens: Right Here tells the story of The Go-Betweens from
the inside out, from the people who lived it, and from those whose lives were transformed by it.