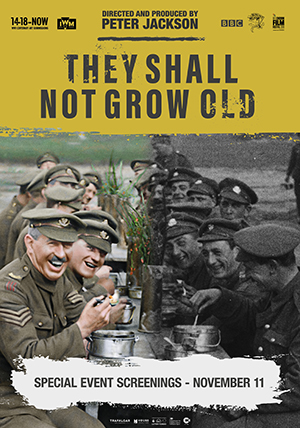 They Shall Not Grow Old

A documentary about World War I with never-before-seen footage to commemorate the centennial of the end of the war. Warner Bros. and Roadshow Films are thrilled to be bringing this very special film to cinemas on Armistice Day, Sunday 11 November, to commemorate the 100th anniversary of the war.

Acclaimed director Peter Jackson has passionately worked on a World War 1 documentary film called, THEY SHALL NOT GROW OLD. The film is narrated by British survivors of the war, and is absolutely amazing in terms of the footage that was captured at the time, and more importantly, Peter’s advances in colorisation which are gripping. The film was funded by the British Government and the Imperial War Museum, and was met with critical acclaim when it debuted at the BFI London Film Festival on Oct 16.