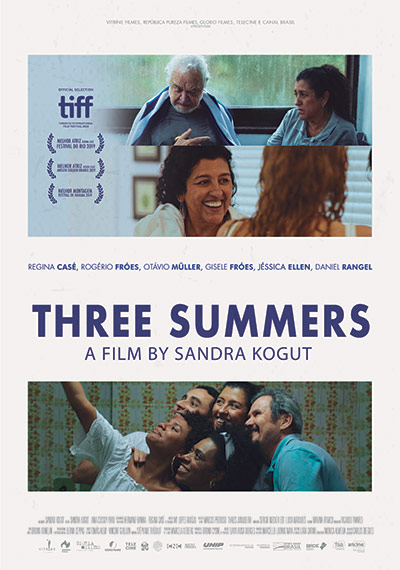 Unfolding over the course of three consecutive summers - 2015 to 2017 - the film follows Madá, a fifty-something caretaker for a cluster of luxury beach-side condos owned by a wealthy Rio de Janeiro family, as she invests in a roadside snack kiosk while tending to the every need of her condescending employers, becomes a bystander in a major money-laundering scandal, and eventually launches a whole new career. With every dizzying new turn of events, Madá manages to retain her high spirits, her sense of loyalty to those who deserve it - and her eagle eye for opportunity.

"[Kogut] displays a keen eye for satirizing Brazil's rigid class structures and how people like Mada try to find their own piece of the pie within them."

"Three Summers charts the progressive chronology of a working-class rebellion, spearheaded by a charismatic domestic employee whose constant yet feigned state of happiness belies a great personal trauma."

"[Kogut]'s approach is methodical, her camera patient, as the cycle of life repeats and goes on despite an environment of fragility and decline."