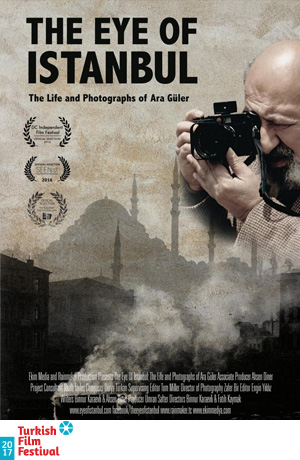 TUR17 The Eye of Istanbul

The Eye of Istanbul tells the story of Ara Guler, the legendary Armenian-Turkish photographer, through the culmination of his retrospective exhibition in Istanbul. Although he is mostly recognized for his black and white photographs of Istanbul, he has enjoyed an international career, which has spanned over sixty years and has generated more than 1 million photographs.

The documentary follows Ara Guler as he prepares for his retrospective exhibition where he assembles his photographs and the stories behind his most iconic images spring to life. From the poor workers of Istanbul to the goat herders of Anatolia, from the portraits of famous artists the likes of Picasso, to the Israeli/Palestinian conflicts, Ara has captured the essence
of the second half of the 20th century.