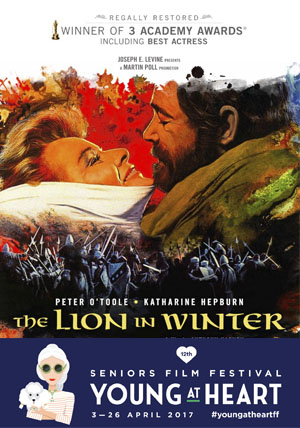 YAH17 The Lion in Winter

At Christmas Court in 1183 King Henry II (Peter O’Toole) argues with his estranged wife, Eleanor (Katharine Hepburn), over whether Prince John (Nigel Terry) or Richard (Anthony Hopkins in his film debut) shall inherit the throne. Complicating matters, King Philip II of France (Timothy Dalton, also his debut) seeks his own fortune by demanding his sister Alais (Jane Merrow), currently Henry’s mistress, be betrothed to Richard, all the while stirring insurrection among all of Henry’s sons toward their father.