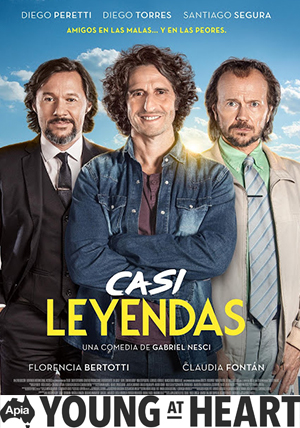 In Argentina, Axel, a lonely man with Asperger’s syndrome decides to re-unite his teenage band. Having lost contact with his bandmates, Axel rigs a contest rescuing rock bands of the 80s and 90s.
For his erstwhile bandmates Javier and Lucas the memories of their musical heyday prove a temptation that’s hard to resist. So 25 years after they missed their big break, the three middle-age men set out to find a second chance at success. By turns hilarious and moving, Almost Legends is a musical delight starring three comedic superstars Diego Peretti, Diego Torres, Santiago Segura.