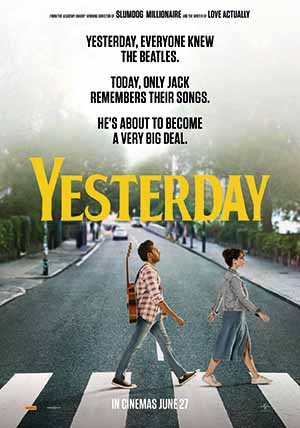 Yesterday, everyone knew The Beatles. Today, only Jack remembers their songs. He’s about to become a very big deal. From Academy Award®-winning director Danny Boyle (Slumdog Millionaire, Trainspotting, 28 Days Later) and Richard Curtis, the Oscar-nominated screenwriter of Four Weddings and a Funeral, Love Actually and Notting Hill, comes a rock-n-roll comedy about music, dreams, friendship, and the long and winding road that leads to the love of your life.


"Yesterday is a superior jukebox musical and it hits all the right notes as a crowd-pleasing rom-com."

"June 26, 2019 The movie feels breezy and fun, even as it touches on serious issues. And then there are the songs, every one of them a gem, all of them well-performed, usually in interesting situations."