You Only Live Twice + On Her Majesty's Secret Serv 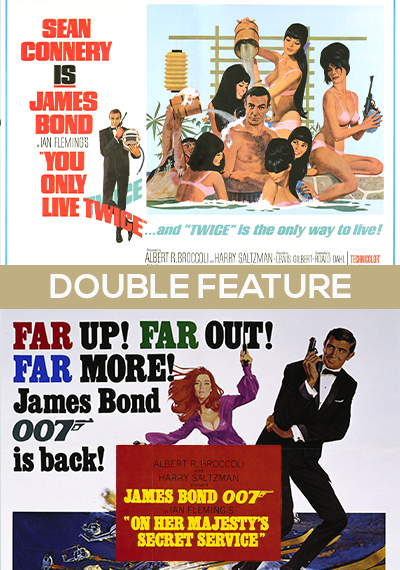 YOU ONLY LIVE TWICE – 1967
Featuring a screenplay by noted author Roald Dahl, this entry follows an American space capsule that is supposedly swallowed by a Russian spaceship. However, James Bond discovers that SPECTRE is behind the theft and endeavours to find out the motive behind it.

ON HER MAJESTY’S SECRET SERVICE - 1969
George Lazenby only appearance as James Bond, this entry into the series opened with a lacklustre reception from audiences but has gone on to be cherished by fans for its solid adaption of the Ian Fleming novel. Bond is assigned a mission to defeat Blofeld, who hypnotizes beautiful women to realise his own evil motives. Meanwhile, he also falls in love with a crime lord's daughter.