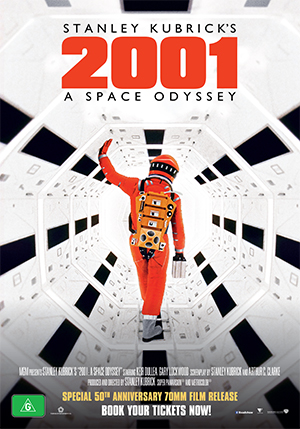 2001: A Space Odyssey returns to the historic Astor Theatre in Melbourne and Palace Centro in Brisbane for a limited season. To celebrate the 50th anniversary, Kubrick's iconic work will be presented from a brand new 70mm print. A cinematic experience out of this world. An epic drama of adventure and exploration. The ultimate trip.

2001: A Space Odyssey is Stanley Kubrick’s dazzling Academy Award© winning compelling science fiction drama of man vs. machine. A stunning meld of music & motion based on Clarke’s short story The Sentinel. At the dawn of Mankind, a tribe of ape-like beings are visited on Earth by a large black monolith. Thousands of years later, in the year 2001, scientist Dr Heywood Floyd (William Sylvester) discovers a similar black monolith on the moon, which then emits a signal aimed at the planet Jupiter. A year later, astronauts David Bowman (Keir Dullea) and Frank Poole (Gary Lockwood) are en route to Jupiter to investigate the signal’s destination and purpose. However, their mission comes under threat when the ship computer, HAL (voiced by Douglas Rain), seemingly develops a malfunction.