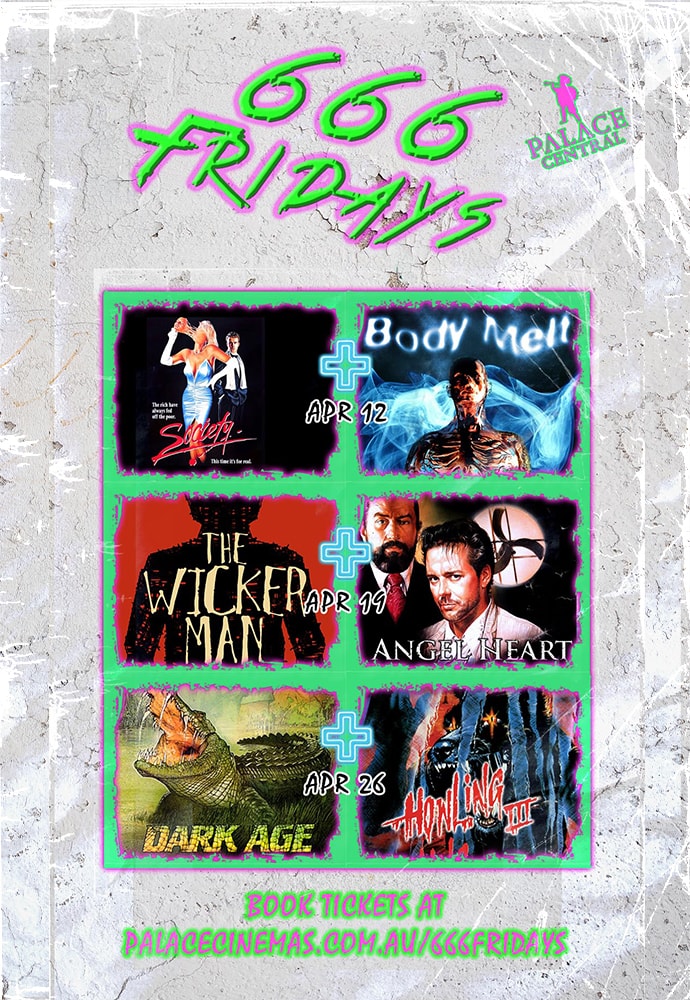 We close out our 6-month celebration with two classic Australian creature features, DARK AGE and HOWLING III: THE MARSUPIALS. An unnerving Australian horror film from the height of the Ozsploitation boom, Dark Age is a complex tale – gorgeously shot by Andrew Lesnie (cinematographer of the Lord of the Rings and the Hobbit trilogies) – which follows a park ranger, assigned with the task of dealing with a saltwater crocodile that’s been killing people, who finds himself at odds with the local indigenous population, a group that believes the crocodile should be preserved due to its connection to their past. Starring John Jarratt, Burnam Burnam and David Gulpilil and famously lauded by Quentin Tarantino, Dark Age is one of Australia’s finest cinematic achievements, deserving of greater appreciation within our cultural canon.

Perhaps the most ridiculous film we’ve screened to date, 666 Fridays is proud to present the NSW debut of the newly remastered NFSA print of HOWLING III: THE MARSUPIALS. Certainly the most outrageous film the Australian government has ever invested money and resources in, Howling III: The Marsupials is a barely-canonical, irony-poisoned, (somehow) officially sanctioned sequel to smash hit werewolf film The Howling. Set in Australia, the film follows an Australian anthropologist who attempts to research Australian werewolves after he discovers footage of indigenous Australian’s sacrificing a wolf-like creature with a marsupial pouch. With an all-star cast including Barry Otto and Dame Edna Everage and funded by infamous Australian figure Charles Waterstreet, Howling III is a big, uniquely Australian, middle finger to the franchise’s original producers, following the director’s issues on the set of Howling II; an absolute laugh riot, it’s a fantastic nugget of Australian cinema that has to be seen to be believed.