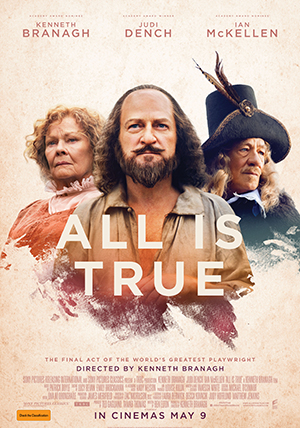 Director and star Kenneth Branagh moves from adapting Shakespeare to playing the man himself with a convincingly world-weary edge, made all the more impressive with his deft direction of his fellow legendary thespians Judi Dench, as Shakespeare’s wife Anne-Hathaway, and Ian McKellen, as a colossal, emphatically wigged Earl of Southampton.

The year is 1613, Shakespeare is acknowledged as the greatest writer of the age. But disaster strikes when his renowned Globe Theatre burns to the ground, and devastated, Shakespeare returns to Stratford, where he must face a troubled past and a neglected family.

Haunted by the death of his only son Hamnet, he struggles to mend the broken relationships with his wife and daughters. In so doing, he is ruthlessly forced to examine his own failings as a husband and father. His very personal search for the truth uncovers secrets and lies within a family at war.