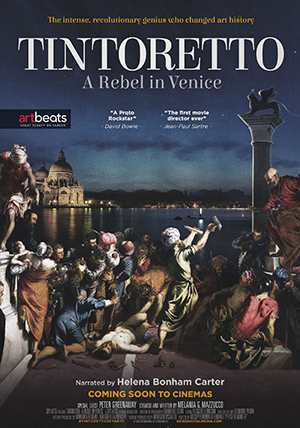 Art on Screen: Tintoretto - A Rebel in Venice

Venice. 1576. The plague spreads rapidly. Those with money and property fled. But one man remains faithful to his city. He is Venice’s most devoted painter –Tintoretto.

Tintoretto, A Rebel in Venice tells the story of the painter Jacopo Robusti, known as Tintoretto, from the early years of his artistic career until his death in 1594 in the city that inspired and challenged him.

This visually spectacular new art film explores Tintoretto as the true mirror of Venice. A one of a kind genius, open-minded, restless, brave and with a strong love for freedom, unstable and elusive, he reflected the true spirit of the lagoon city.

Now the artist dubbed “a proto rockstar” by David Bowie and “the first film director in history” by Jean-Paul Sartre can finally be experienced up close in a stunning state-of-the-art cinema experience, featuring special guest Peter Greenaway and narrated by Academy Award nominee Helena Bonham Carter.