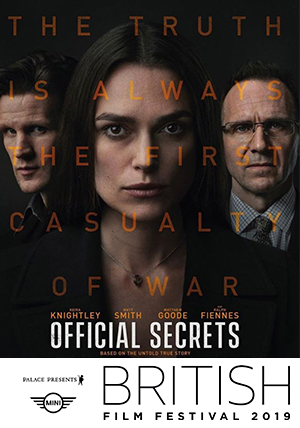 A stellar cast including Kiera Knightly and Ralph Fiennes shines in Oscar-winning director Gavin Hood’s (Tsotsi, Eye in the Sky) superb true-life political thriller about an accused British whistle-blower who leaked information about the Iraqi invasion.

It’s 2003 and British and American politicians are pressing the case for the invasion of Iraq. British intelligence specialist Katharine Gun (Knightly) is a secret service employee who receives a memo from the NSA with a shocking directive: The United States is enlisting Britain's help in collecting compromising information on U.N. Security Council members to blackmail them into voting in favour of an invasion of Iraq. Aware of the potential explosive repercussions of this illegal directive, Gun is unable to stand by and watch the world be rushed into war. Making the gut-wrenching decision to defy her government and leak the memo to the press, Gun becomes a reluctant heroine who risks it all in trying to prevent a war and save the lives of thousands.

Mixing thrills with political commentary, Official Secrets is a gripping and timely portrayal of ordinary men and women working together to defeat corruption, resulting in a stirring cinematic experience.