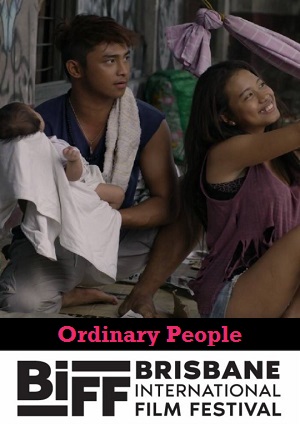 Winning a swag of international awards and considered by Cinemalaya as 2016’s top Filipino film, Ordinary People is a visceral, gutsy piece of cinema that hallmarks writer/director Eduardo Roy Jr as a strident, important voice in contemporary Filipino cinema.

Sixteen-year-old Jane and her one-month-old baby live on the harsh urban streets of overcrowded Manila where the gap between abject poverty and wealth continues to increase at alarming rates. Jane and her boyfriend Aries, the baby’s father, survive from day to day as pickpockets eking out a paltry existence and sleeping on flattened cardboard boxes. Not even a month into their young parenthood a catastrophic occurrence stretches them to their limits and tests the streetwise couple.

Boasting incredible performances by Hasmine Kilip (Jane) and Ronwaldo Martin (Aries) that have been acknowledged with multiple international acting awards, Ordinary People is a heart-wrenching, honest portrayal of homeless people on the margins of society, who go unseen each day. This is unforgettable cinema.

“Try being a teenage parent – sleeping on the sidewalk, living off unsuspecting victims’ belongings, playing hopscotch with speeding vehicles.

As if those aren’t enough, the streets have plenty of dark corners with unknown dangers waiting to come at you the second you let your guard down.” - Eduardo Roy Jr.