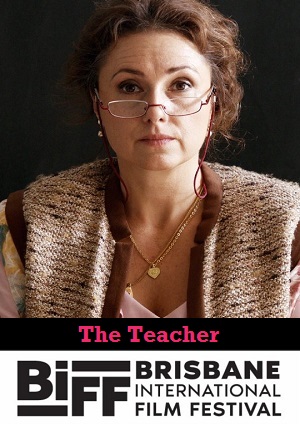 Inspired by a true story straight out of Communist-era Czechoslovakia, The Teacher is a wildly entertaining, bone-dry black comedy about a corrupt schoolmistress on the take, who shamelessly manipulates her pupils and their families to line her own pockets.

There’s an ulterior motive to the mousy Mrs Drazděchová (Zuzana Mauréry) kicking off each term at her suburban high school by asking her students to share their parents’ jobs with the class. Behind her bespectacled, frumpy facade beats the heart of a cunning grifter, and it’s not long before the unscrupulous educator is pressuring her kids and their families for favours – everything from picking up shopping to free lifts and haircuts. Of course, if the teacher gets taken care of in these times of austerity, the children somehow get good grades.

When Mrs Drazděchová’s demands grow complicated and dangerous enough to get her noticed by her colleagues, the principal secretly rallies the parents to whip up a petition to get her kicked out of the school. However, the wily woman’s Communist Party connections run deep, and she won’t go down without a fight.

Oscar-nominated (Divided We Fall) writer/director Jan Hřebejk’s sharp and wickedly funny new film is a cautionary tale of what happens when influence runs unchecked, and how human greed will always rise to spoil a noble ideal.