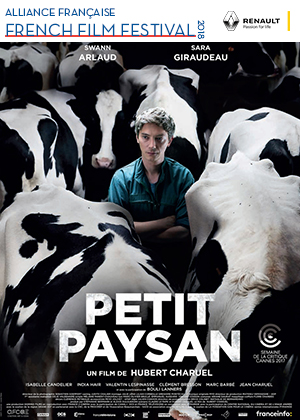 This debut feature from Hubert Charuel sees the filmmaker channel his own childhood in France’s rural northeast – even shooting the film at his own parent’s working dairy farm – using it as the backdrop for a captivating psychological thriller in which a desperate farmer takes desperate
measures to protect his livelihood. Swann Arlaud, one of French cinema’s most exciting upand- coming talents, plays a lonesome 30-something dairy
farmer, Pierre, whose life revolves around his veterinarian sister, his parents and his property. A deadly virus affecting cows hits France and Pierre finds one of his much-loved herds infected. Distraught at the prospect of losing even one cow, he attempts to hide the outbreak from authorities
and vows to fight to the bitter end to save them, even if it means resorting to drastic and irreversible measures. Charuel’s firsthand experience of farming life creates an authentic 'mise en scène' that juxtaposes the hardships
of family micro-farming against giant multinational agribusinesses; a plot-point that is reflected in its French title, Petit paysan (little farmer). This is a compelling and impressive debut that pulls at the heartstrings in an
unsuspecting way, which was reflected in its widespread acclaim when screened at the 2017 Cannes International Critics Week.