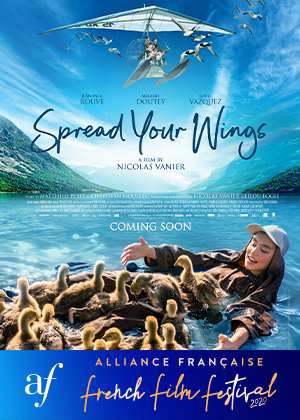 Classic father-and-son tensions get a thrilling, new lease of life thanks to the family adventure Spread Your Wings from director Nicolas Vanier (AF FFF18, The School of Life; AF FFF14, Belle and Sebastian).

Inspired by a true story, Spread Your Wings follows videogame-addicted teenager Thomas (Louis Vazquez) who is sent by his mother, Paola (Mélanie Doutey, AF FFF15, The Connection), to spend the school holidays with his father in the beautiful, yet secluded, wetlands of the Camargue region in Southern France.

With no Wi-Fi and only his ornithologist father, Christian (Jean-Paul Rouve, AF FFF19, Kiss & Tell; AF FFF18, C’est la vie!), for company, Thomas is slowly drawn into his father’s passion for a gaggle of newborn, wild geese. Together, father and son train the birds for their first migratory flight, hoping to free them from captivity. By doing so, they also start to rebuild their own strained relationship.

Revolving around this familial dynamic, Spread Your Wings gently echoes the broader international rise of young activists debating the future of a planet they are about to inherit. It is a beautiful film; a timely family adventure about how even the smallest gestures can have a huge impact.

"“This wonderful journey, in the air, in the company of geese, above the landscapes of Northern Europe, will be unanimous.”"