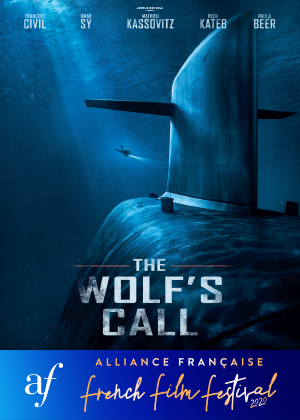 Diplomat, novelist, comic creator and screenwriter Antonin Baudry has yet another skill to add to his impressive résumé – that of film director. Baudry’s action-packed feature debut is a stunning submarine-set thriller. The Wolf’s Call was a box office sensation in France, and is now cruising into international waters. While collaboration is key for a French submarine crew, whose mission it is to rescue a special forces team near Syria, the job of sonar technician Chanteraide (François Civil, also in Someone, Somewhere at this year’s Festival) is one of the most vital. Chanteraide has the special ability to identify sounds few other can register, and Baudry builds riveting tension through the strange sounds Chanteraide hears as the submarine’s crew return to the ocean after a precarious mission.

What begins as a routine journey, quickly escalates into a fullscale nuclear threat as relations between France and Russia hit breaking point. Baudry draws on his own diplomatic résumé to highlight the political and human implications of ocean-based strategic warfare.

A stellar supporting cast – including Omar Sy (AF FFF18, Two is a Family and The Lost Prince, also playing at this year’s Festival) and Mathieu Kassovitz (AF FFF18, Ladies; AF FFF16, The Bureau) – round out what is a heart-stopping naval thriller, set in the murky world of underwater intrigue.

"“The Wolf’s Call offers pulse-pounding action and military intrigue on a level you just don’t see from Hollywood filmmaking anymore.”"