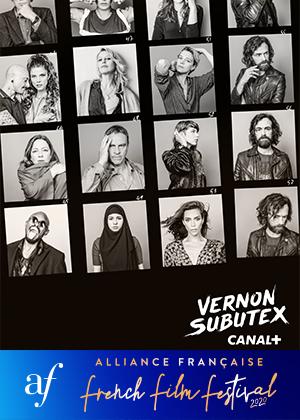 With its world premiere on the opening night of the 2019 Cannes International Series Festival, Canal Plus’ Vernon Subutex is based on two bestselling novels by iconic French author and filmmaker Virginie Despentes that dive deep into the underbelly of Paris’ underground music scene.

In the first three episodes, we’re introduced to Romain Duris (who also voices the documentary Aznavour by Charles at this year’s Festival) as the film’s title character Vernon – the one-time owner of a famous record store, ‘Revolver’, whose life is now in shambles after its closure. Unemployed and homeless, Vernon’s only hope is that his old network of ‘90s music industry peers will somehow help him get back onto his feet.

A thread of hope appears when rock superstar Alex Bleach (Athaya Mokonzi) reaches out. Bleach’s sudden death makes Vernon a target when it is discovered he is in possession of a number of videotapes Bleach left behind.

Romain Duris, one of France’s most exciting actors, again turns his talents in an unexpected direction, shining in this reckless story of an eccentric burn-out caught up in increasingly bizarre circumstances.