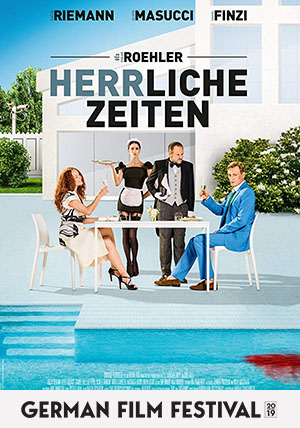 Award-winning director and enfant terrible Oskar Roehler (No Place to Go, 2000) presents this deliciously twisted satire about class divisions, inspired by eccentric novelist Thor Kunkel's Subs.
Well-to-do couple, Evi (Katja Riemann), a landscape designer, and her plastic surgeon husband Claus (Oliver Masucci), are left in the lurch when their housekeeper unexpectedly quits. Distressed and barely able to cope picking up after themselves, Claus posts an ad for a new cleaner: “Slave wanted (m/f)”. When applicants queue up in front of the couple’s bungalow offering themselves as sex-slaves, he realises his ad has been taken quite literally. Then, the polite, educated, and attentive Mr. Bartos (Samuel Finzi) comes along, begging to be hired. Initially reluctant, the Müller-Todts begin to enjoy the heavenly pampering they receive from their new servant. But as the service progresses, the situation turns from peaceful order into pure comedy pandemonium.