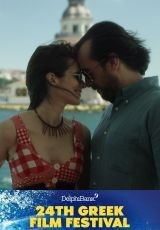 Mysteries are uncovered and dirty laundry aired as one family’s closet is raided for skeletons in Roza of Smyrna, George Kordellas’ “Greco-Turkish Romeo and Juliet” (Ekathimerini).

Preparing for an exhibition in the Turkish city of Izmir (formerly known as Smyrna before the Greco-Turkish War of 1919-1922), a collector of historic objects and curiosities, Dimitris (Tasos Nousias), finds an untold story waiting in the depths of a small antiques store: a wedding dress stained with blood, a photograph and a letter.

These three items lead Dimitris and his girlfriend, Rita (Youlika Skafida, Apnea, GFF 2011), to the enigmatic Roza (Leda Protopsalti), matriarch of a once powerful family who has been holding the weight of the past on her shoulders for decades.

Based on the novel Ismael and Roza by Giannis Giannellis and featuring two original songs by Haris Alexiou, Roza of Smyrna was nominated for the Orpheus Award for Best Feature Film at the Los Angeles Greek Film Festival 2017.