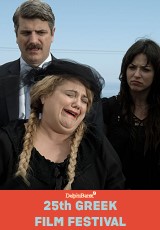 With a fortune on offer, the skeletons in this town’s closet get an airing.

Scandalous affairs, unsolved crimes, hidden double lives – one small island can hold a lot of secrets, and they’re about to be disclosed one-by-one.

After his sudden death, an island’s richest man reveals himself as a mischievous troublemaker from beyond the grave. With no one to inherit his estate, he offers it to the four leaders of the village: the mayor, the police officer, the teacher and the priest. There’s just one catch. To earn their prize, they each have to read a letter to the public detailing their dirty little secrets.

Grossing US$5.6 million at the Greek box office, spawning an equally successful sequel in 2011 and featuring as the Opening Night Film of our 2010 Greek Film Festival, Nisos is a funny and clever whodunnit where one revelation leads to another, mysteries unfold and no one is safe.