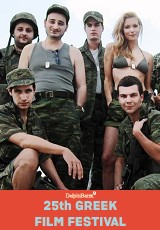 GFF18 Sirens in the Aegean

The biting and sardonic follow-up to Perakis’ comedy classic, Loafing and Camouflage (1984).

Originally screened at the Greek Film Festival in 2006, Sirens in the Aegean places us on a Turkish yacht impounded by Greek sailors after its captain attempts to put a group of illegal immigrants ashore on the small Greek island of Pitta. Also aboard the yacht are two women (one of which happens to be the niece of a Turkish Admiral) and a camera crew en-route to the Turkish island of Bodrum for a modelling shoot.

As events unfold and the inevitable stalemate develops, tempers fray, passions flare and stereotypes and prejudices come to the fore with the two sides attempting to avoid a potentially embarrassing international incident.

Coming off the back of Loafing and Camouflage, Sirens in the Aegean attracted an audience of over 1.5 million viewers, placing it (at that time) behind only James Cameron’s history-making Titanic in terms of popularity.

Please note this film will screen in Greek without English subtitles.