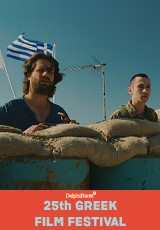 A metaphor for political and social life on both sides of the Cypriot divide told through a man and his dog.

Marios Piperides’ debut feature, Smuggling Hendrix, is a touching and uplifting comedy-drama about one man’s unwavering commitment to his best friend. Dumped by his girlfriend, Kika (Vicky Papadopoulou), and mired in debt, struggling musician Yiannis, (Adam Bousdoukos, Wednesday 04:45, GFF 2015) abandons his crumbling life in Cyprus to move to The Netherlands. But, shortly before he’s due to depart, his beloved dog, Jimi, runs away and crosses the UN buffer zone that divides Greek and Turkish Nicosia.

Forced to deal with absurd restrictions that prevent the transport of animals across the zone, Yiannis forms an unlikely alliance with his ex-girlfriend, as well as cross-border accomplices, Hasan (Fatih Al) and Tuberk (Özgür Karadeniz). Together, they embark on a series of elaborate but ultimately comical schemes to smuggle the irrepressible Jimi back home.

Although making his feature directorial debut with Smuggling Hendrix, Marios Piperides is well-regarded as a writer and producer in the Greek film industry. He produced Rosemarie, which is also appearing in this year’s GFF.