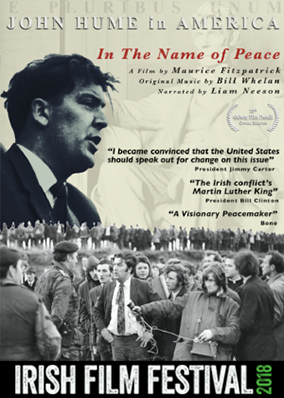 ISH18 In the Name of Peace; John Hume in America

John Hume saw that by harnessing the political influence of the Irish American diaspora in Washington it was possible to address the legacy of colonial division in Ireland and to achieve peace.


In the Name of Peace: John Hume in America is a compelling feature documentary, narrated by Liam Neeson, with dramatic footage from the conflict in Northern Ireland and stirring accounts by Presidents Bill Clinton and Jimmy Carter as well as US Congressmen and Senators. This film shows how one man with courage and charisma, inspired by Martin Luther King, mobilized Irish Americans and America to bring an end to years of bloody violence in his homeland. With musical score by Bill Whelan (Riverdance), this beautiful film reminds us of the redemptive powers of politics to overcome hatred and division: in the words of Hume’s fellow Derryman, Seamus Heaney, when, ‘once in a lifetime, the longed-for tidal wave of justice can rise up, and hope and history rhyme’. At a time of great world instability, this is a timely film highlighting creative leadership and the need for steady international co-operation.