JFF21: Beyond the Infinite Two Minutes 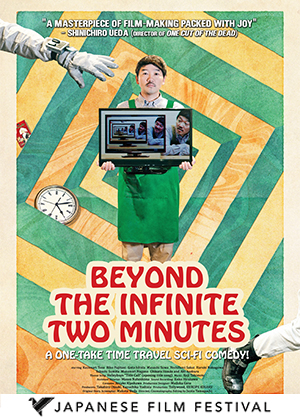 After a regular day of work at his café, Katō hears his computer screen talking to him, and is met with a bewildering sight—it’s another version of himself, but from two minutes into the future! When future Katо̄ instructs him to check the TV in his café, he finds himself replicating the exact actions he just saw “other Katō” doing. It’s not long before he realises that the two screens are mysteriously linked by a two-minute delay.

Of course, once Katō’s nosey friends catch wind of his newfound ability to foresee the future, they can’t resist trying to use it for their own personal gain, leading to hilarious antics and some very questionable decisions. As this confused timeline goes on, Katō's longtime crush and some yakuza enter the picture, while a greedily desired "time echo" accelerates the fiasco.