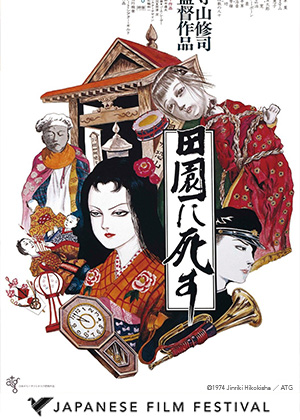 Starting with a series of haiku poems about his childhood, Terayama takes us through his cathartic and epiphanic quest for self-discovery, as important highlights from the director’s youth, including the strained relationship with his mother and his teenage sexual desires, unfold before our eyes. A spellbinding journey that deeply intertwines the director’s memories and fantasy, the director’s second feature film, Pastoral Hide-and-Seek is a metaphorical and sensory experience where every shot and character is imbued with rich and symbolic meaning. As the young protagonist attempts to confront his past, he faces the haunting scrutiny of Fellinian superstitious villagers and mingles with the caricaturesque inhabitants of a pop-up circus. Throughout, we see the director slowly walking through his past and present darkest desires, gracefully interlacing his unrestrained imagination with sobering truths.