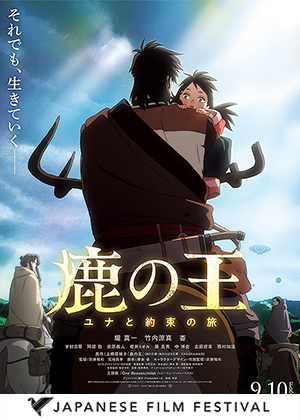 Production I.G, the acclaimed anime studio that brought us Ghost in the Shell and Miss Hokusai, is back with a new masterpiece, bringing to life Nahoko Uehashi’s fantasy novel series The Deer King. Taking place in the years following a vicious war, The Deer King tells the epic fantasy story of a world fallen prey to the deadly Black Wolf disease. The Zolian Empire is hit by the plague while the people of Aquafa remain immune to it. Only a few have managed to outlive the disease; former soldier Van, who is the sole survivor of his clan, and a little girl called Yuna. The two find themselves caught up in the conflict, as they are believed to be the cure to the epidemic.

The Deer King is a high-fantasy delight that delivers sumptuous animation, entrancing characters and slick action scenes. In his directorial debut, Masashi Andō (character design of Princess Mononoke, Spirited Away) creates a hopeful tale of resilience that reinforces the importance of having strong personal bonds.