JFF21: The Fruits of Passion 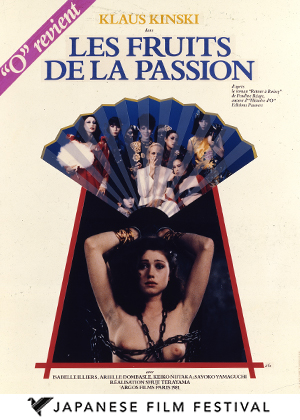 The lecherous and wealthy Sir Stephen (Klaus Kinski) sends his young lover O (Isabelle Illiers) to a brothel in Southern China, so she can prove her unconditional love and obedience to him. While O is subjected to a variety of erotically humiliating and misogynistic experiences in this surreally pittoresque environment, a local rebellion stemming from resentment towards foreign imperialism arises, and an impoverished young man joins the revolution just to afford a night with O.

Loosely based on the novel Return to the Château by Anne Desclos, which was written as a sequel to the Story of O, this sexually explicit drama by Terayama and mainstream French producer Anatole Dauman (In the Realm of the Senses) relocates the original characters from Paris to 1920s Southern China. The film’s collateral vignettes, together with rainbow-filtered scenes focusing on other, more captivating characters from the brothel, are used by Terayama to cleverly depict his idea of sex as a form of political revenge.