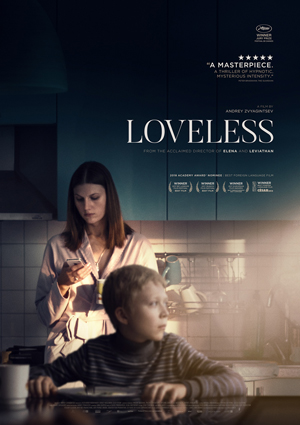 The searing, multi award-winning new drama from Andrey Zvyagintsev (Leviathan, Elena, The Return), arguably the most fearless and vital filmmaker in modern European cinema, LOVELESS is a razor-sharp and gripping portrayal of a family – and society – on the precipice of collapse.

Boris (Alexey Rozin) and Zhenya (Maryana Spivak) live together in the same Moscow apartment, but their relationship is all but over. Caught in a spiral of slanging matches and eager to be freed into the company of new lovers, the only thing keeping them together is the still-to-be-finalised sale of their apartment. What this means for their 12-year-old son, Alyosha (Matvey Novikov), doesn’t seem to be of primary concern. But when he doesn’t return home one night, the couple are confronted by ambivalent and resource-strained authorities, and must mount their own independent search… one that forces them to confront their fears, past actions and complacency.
Shot with trademark precision, his stately compositions paired with taut moral narratives of greed and injustice, Zvyagintsev again proves to be the pre-eminent chronicler of his country’s 21st century malaise. Earning rave reviews at Cannes, where it topped the Screen International jury poll as best of the festival, LOVELESS is one of the most powerful and essential cinematic experiences of 2018. Don’t miss it.