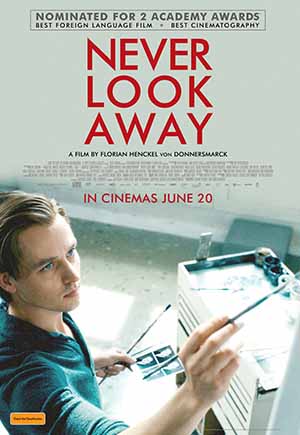 Academy Award® winning writer/director, Florian Henckel Von Dommersmarcka (The Lives of Others) brings us his most ambitious film to date. The sweeping romantic historical drama, NEVER LOOK AWAY follows thirty years in the life of a great artist - loosely based on Gerhard Richter, one of the 20th century's most admired visual artists - played by Tom Schilling (WOMAN IN GOLD). The film goes from a childhood witnessing Nazi Germany, to post-war East Berlin, where he falls in love with a young woman (Paula Beer, FRANTZ) whose father is an ex-Nazi murderer in hiding (Sebastian Koch, THE LIVES OF OTHERS), to escaping to the West at the time of the Berlin Wall, and ultimately being part of the exciting new movement in contemporary art.