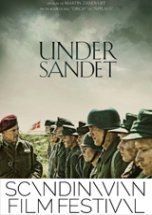 SCA16 Land of Mine

Based on extraordinary true events, writer/director Martin Zandvliet’s stunning, multi award-winning new film is a nail-bitingly tense thriller about a group of young German prisoners of war in Denmark in the immediate aftermath of World War II, which examines both the repercussions of retribution and the value of forgiveness.

In the days following the surrender of Nazi Germany in May 1945, a group of German soldiers – most barely out of their teens – are put to work by their Allied captors. With minimal training, they are set the dangerous task to locate and disarm their own hidden weapons that still litter the beaches along Denmark’s west coast, under the supervision of a righteous and embittered Danish sergeant, Rasmussen (Roland Møller, in a superb performance). Scornful of the Germans for their five-year occupation of his country, he ruthlessly marches his squad out on the dunes each day to prod for mines. Yet this risky task soon challenges even Rasmussen, who grows more and more conflicted in his feelings toward his young charges.

Zandvliet’s powerful and morally complex tale is riveting viewing, with a potency that echoes Peter Weir’s Gallipoli and Kathryn Bigelow’s The Hurt Locker but an impact truly of its own. This unforgettable film demands to be experienced on the big screen.