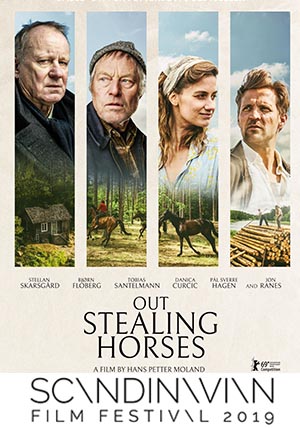 Screening to wide acclaim in competition at the 2019 Berlin Film Festival, this loving adaptation of Norwegian novelist Per Petterson’s international bestseller is a powerful evocation of the inner lives of men tormented by their past.
Internationally renowned Swedish actor Stellan Skarsgard (The Girl with the Dragon Tattoo, Nymphomaniac) is impeccably cast as 67-year-old widower Trond, whose past has riddled him with unhealed wounds. Having lived most of his adult life in Sweden, the death of his wife in a car accident sends him back to his Norwegian homeland. Although he arrives in the depths of a gleaming, snow-laden winter, Trond’s memory drifts back to the summer of 1948 when a sequence of disturbing tragedies shattered his once blissful childhood.
As Trond’s recollections are further crystallised by the presence of his neighbour Lars (Bjørn Floberg), the two men relive the events that both shattered and enmeshed their families. Set amongst breathtaking landscapes, Out Stealing Horses is an epic coming-of-age drama which deftly charts a gamut of emotions from love, loss and disappointment to guilt and irreparable lifelong traumas.