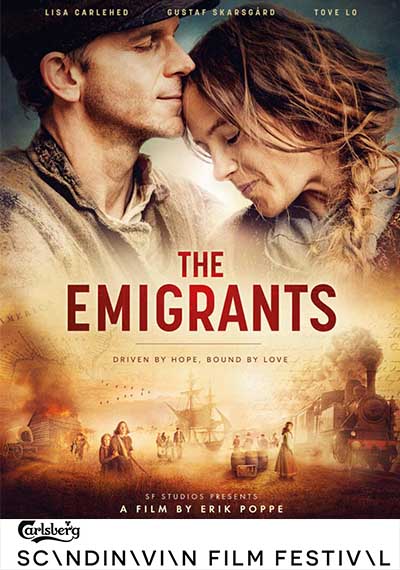 During the mid-19th century, millions of Scandinavians left hunger and distress in the hope of a better life in America. In this monumental tale, we follow Kristina (Lisa Carlehed), Karl Oskar (Gustav Skarsgård) and their young children who leave a poverty-stricken Sweden in the 1850s and set out on a long, dangerous journey across the Atlantic and into wild North America.

Based on Vilhelm Moberg’s much loved best-selling series of novels which were adapted in 1971 by Jan Troell into an award-winning and Oscar nominated film, the story is now being told on film for the first time from Kristina’s perspective.

With an ensemble cast featuring Swedish pop sensation Tove Lo, Sofia Helin and Lena Strömdahl, The Emigrants (2021) stands out as a poignant yet timeless story about who we are, where we belong, and how far we are willing to go to save our children and achieve our dreams.