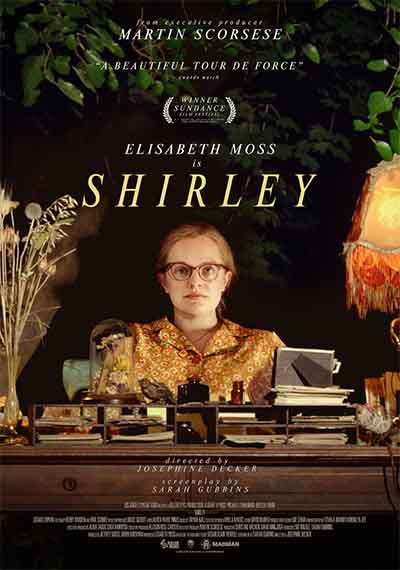 Newly-wed students, Fred and Rose (Australia's Odessa Young), move to a small Vermont college town with the hope of starting a new life. They receive an offer of free room and board from a professor (Michael Stuhlbarg), if Rose agrees to spend time cleaning and looking after his wife – renowned horror author Shirley Jackson (Elizabeth Moss).

Shirley detests their presence, which heightens tensions in the tempestuous relationship with her philandering husband. Fred and Rose's love is tested when they find themselves fodder in the eccentric couple’s psycho-drama, which inspires Jackson's next major masterpiece.


"There are few more daring actors around right now than Moss, and "Shirley" may be her best performance yet. She's brutally cutting but the pain of every slight ripples across her face."

"With Elisabeth Moss brilliantly playing horror author Shirley Jackson like a volcano on the verge of eruption, this teasing, spellbinding psychodrama from Josephine Decker preps us to expect the unexpected. Fasten your seatbelts."

"A thrillingly perverse example of what happens when the shackles of biopic formula are cast aside."