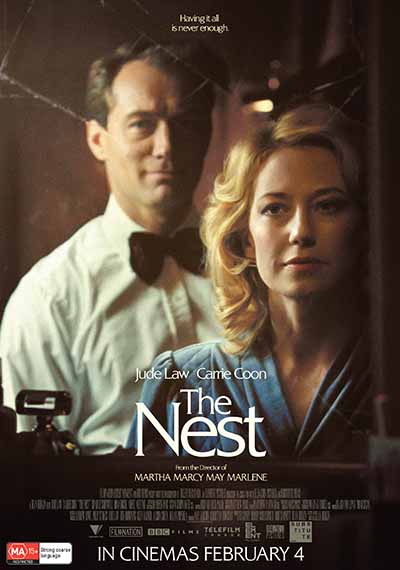 A psychological thriller of matrimonial mind games, THE NEST explores the strains a transatlantic move puts on a marriage.

Rory (Jude Law), an ambitious entrepreneur and former commodities broker, persuades his American wife, Allison (Carrie Coon), and their children to leave the comforts of suburban America and return to his native England during the 1980s. Sensing opportunity, Rory rejoins his former firm and leases a centuries-old country manor, with grounds for Allison’s horses and plans to build a stable. But the family buckles beneath an unaffordable lifestyle and increasing isolation as they head toward a seemingly inevitable breakdown.

Driven by superb performances and a masterfully crafted aesthetic unease, Sean Durkin’s second feature contemplates the corrosive value system of the 1980s and its human toll, as it spreads like a sickness nobody realized was there. Rory is its embodiment—the unrepentant capitalist for whom wealth and status become the measure of self-worth. This moral poison enters his home, sending everyone down their own self-destructive paths. Blurring social critique and character drama, Durkin reflects on the moral and spiritual emptiness of an unselfconsciously aspirational society—one in which we forsake everything to get what we want, even when we no longer know why we want it.

"Not a lot of storytellers working in movies today take the time to lay the emotional foundation of each character. Durkin does, and when his characters crack, the destruction feels all the more pronounced"

"Even after it's over, "The Nest" continues to build"

"Thanks to career-best performances from Law and Coon and Sean Durkin's excellent direction, The Nest is is something truly special"

"As devastating as The Nest often is, the sheer beauty of individual moments is still elating"