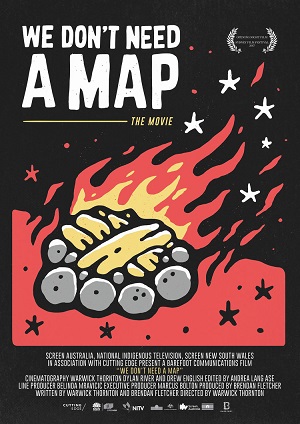 We Don't Need A Map

From the acclaimed director and artist Warwick Thornton (SAMSON & DELILAH) comes WE DON’T NEED A MAP, an in-depth look at the rich and surprising history of one of Australia’s most iconic and contentious symbols: The Southern Cross.

The Southern Cross is the most famous constellation in the southern hemisphere. Ever since colonisation it’s been claimed, appropriated and hotly-contested for ownership by a radical range of Australian groups. But for Aboriginal people the meaning of this heavenly body is deeply spiritual. And just about completely unknown. For a start, the Southern Cross isn’t even a cross – it’s a totem that’s deeply woven into the spiritual and practical lives of Aboriginal people.

Now one of Australia’s leading film-makers, Warwick Thornton, tackles this fiery subject head on in a bold and poetic essay-film.

WE DON’T NEED A MAP challenges us to consider the place of the Southern Cross in the Australian psyche. Imbued with Warwick’s cavalier spirit, this is a fun and thought-provoking ride through Australia’s cultural and political landscape.