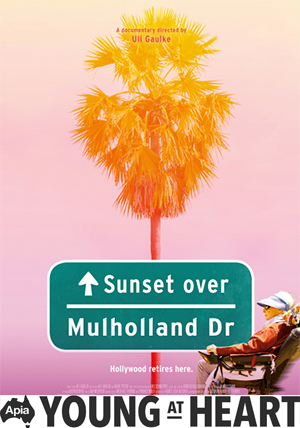 
Hidden at the end of Mulholland Drive lies the Motion Picture & Television Fund. The fund was created by Hollywood’s earliest luminaries such as Charlie Chaplin and Mary Pickford, who realised the need to help those in the industry who fell upon hard times. Today, the MPTF houses a unique retirement community: men and women who were once the backbone of showbiz, including actress Connie Sawyer (When Harry Met Sally…1989) and producer Daniel Selznick (American Graffiti 1973).

Still burning for movies and entertainment, the film follows the residents on a creative endeavour, from the first brainstorming session all the way to the premiere, revealing enduring dreams beyond the limelight – and lessons in life and love.