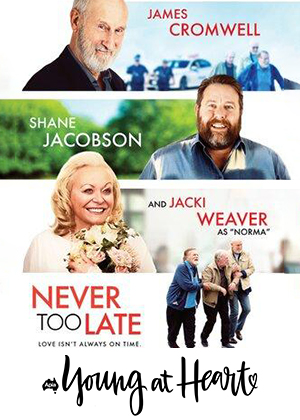 It's The Great Escape meets Grumpy Old Men in Mark Lamprell’s Never Too Late when four war buddies are faced with a new mission: to break out of their nursing home.

Having survived a Vietnamese POW camp, the ex-military men nicknamed, ‘The Chain Breakers’, reveal the spirit of rebellion is never age-specific. Featuring a stunning ensemble cast of actors who are all over 70 years old – Oscar-nominees Jacki Weaver and James Cromwell next to Jack Thompson, Roy Billing, and Minder's Dennis Waterman – each has a dream to chase, and nursing home walls won’t stand in their way.

A delightful tale of love, friendship and determination, senior citizenship is no barrier for these rowdy larrikins who refuse to back down when it comes to achieving their dreams.