With the 2022 Carlsberg Scandinavian Film Festival kicking off this week, we’re celebrating the best of Nordic cinema with these five standout films from the Festival. Read on for the most unmissable films from this year’s festival, or, visit the Scandi homepage and browse the full program here.

Margrete – Queen of the North

From acclaimed director Charlotte Sieling (Borgen, The Killing, The Bridge), Margrete – Queen of the North brings the story of one of the most powerful women in Nordic history to the big screen.

In the year 1402, Denmark’s Queen Margrete (Trine Dyrholm) has achieved what no man has managed before. She has gathered Denmark, Norway and Sweden into a peace-oriented union, which she single-handedly rules through her young, adopted son, Erik (Morten Hee Andersen). However, the union is beset by enemies and therefore Margrete is planning a marriage between Erik and an English princess. An alliance with England should secure the union’s status as an emerging European power, but a breathtaking conspiracy is underway that could tear Margrete and all that she believes in apart.

Directed and co-written by Sieling and inspired by actual events surrounding the reign of Queen Margrete I, Margrete – Queen of the North is a lavish historical drama that blends grand visuals with the psychological unease of a chamber piece, exploring the legacy of a visionary ruler who brokered the historic Kalmar Union. During the mid-19th century, millions of Scandinavians left hunger and distress in the hope of a better life in America. In this monumental tale, we follow Kristina (Lisa Carlehed), Karl Oskar (Gustav Skarsgård) and their young children who leave a poverty-stricken Sweden in the 1850s and set out on a long, dangerous journey across the Atlantic and into wild North America. Based on Vilhelm Moberg’s much loved best-selling series of novels which were adapted in 1971 by Jan Troell into an award-winning and Oscar nominated film, the story is now being told on film for the first time from Kristina’s perspective.

With an ensemble cast featuring Swedish pop sensation Tove Lo, Sofia Helin and Lena Strömdahl, The Emigrants (2021) stands out as a poignant yet timeless story about who we are, where we belong, and how far we are willing to go to save our children and achieve our dreams 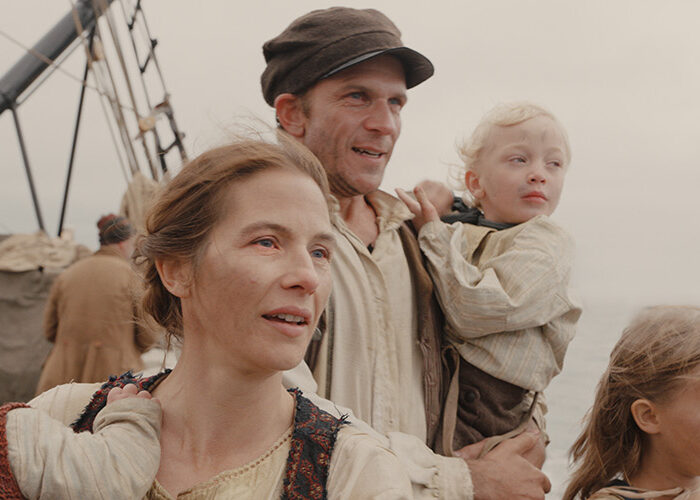 Cinema legends Max von Sydow and Liv Ullmann deliver remarkably authentic performances as Karl Oskar and Kristina, a couple who meet with one physical and emotional trial after another, having experienced an arduous journey to America from Sweden, and now living in the wilderness of Minnesota.

Based on Swedish author Vilhelm Moberg’s four-part series of novels about the mid-nineteenth-century wave of emigration from Sweden to the United States, Troell’s engrossing drama depicts with precise detail their story, a story which is also that of countless other people who sought better lives across the Atlantic. An idiosyncratic dark comedy direct from the 2022 Cannes Film Festival Critics’ Week, The Woodcutter Story is a surreal exploration of the meaning of life.

Pepe (Jarkko Lahti) is a sweet-natured woodcutter in an idyllic small town in northern Finland. Surrounded by friends and family who gather in the evenings around dinner and card games, Pepe is content with his simple existence.

Over the span of a couple of days, a series of events gradually destroys the quiet and happy life he once had, yet Pepe remains unfazed. As the ensuing days throw all sorts of chaos, strife and surreal adventure at him, Pepe remains determined to look on the bright side. Always smiling, always optimistic, as if he knows a secret to existence that no one else does.

Shot on 35mm film and featuring deadpan humour, the snow-covered haunting and absurd fairy tale The Woodcutter Story is the feature film directorial debut from Mikko Myllylahti, writer of Cannes Un Certain Regard winner The Happiest Day of Olli Mäki. Food is the way to the heart in this entertaining and heartwarming story of love, friendship and second chances.

Karin (Marie Richardson, Daybreak) and Sten (Björn Kjellman) are celebrating their 40th wedding anniversary with friends when when Karin discovers a secret Sten has been hiding. Having spent her life taking care of her family, the sudden change it brings forces Karin to re-evaluate her life.

Her old school friend Monika persuades her and their mutual friend Pia to join a cooking class led by renowned chef Henrik (Peter Stormare, Fargo). So begins the Tuesday Club, and in the hot kitchen with exotic spices, amazing food, old and new friends, more than one of Karin’s long-lost passions are reborn. Amongst the hissing frying pans and steaming scents, Karin soon discovers that it is never too late to dare to follow her dreams.

A feel-good debut feature from Swedish director Annika Apelin, Tuesday Club is a charming romantic comedy about women, their friendships and passions, that will inspire audiences to eat good food and embrace life. 1917, releasing January 9th Academy Award-Winning Director Sam Mendes returns with what can only be described as a cinematic masterpiece, a film that delivers incredible visual spectacle yet distils intimate emotional resonance within a timeless story of the ferocity of war and sanctity of life. Penned as a dedication to Mendes’ Grandfather, 1917 follows two…